Traditional Industries in the Area

There has been a long tradition of navigation in Kalajoki for many centuries. Farmers from the Kalajoki district would often sail their own boats to foreign ports to trade their goods. There was a trading harbour at the mouth of the Kalajoki River at least around the 16th century. Ships coming from other districts had to pay tolls at this harbour before being allowed to trade their goods. The Kalajoki farmers traded there goods not only in their local districts but also in the Baltic region and the opposite shore of the Bothnian Gulf. These local farming tradesmen were wealthy and they were also quite often elected to important positions within the parish. There were also local workmen who were employed by trade companies or local ship captains.

On the opposite bank of the river from the Plassi market there was a shipbuilding yard where tradesmen from Kokkola built ships. This yard was at its busiest point at the beginning of the 18th century. Besides the ordinary sea and river boats they built in the 16th and 17th century larger sailing ships in the district.

In the year 1874 the Kalajoki farmer tradesmen decided to build a Barque ship which was given the name ‘Kalaja’. This ocean going vessel sank near the Newfoundland coast after about ten years of sailing in the far seas.

Around the late 19th century the sailing boat era started to die out and be replaced by the new era of steamboats. At around the same time the river bed at the mouth of the Kalajoki River began to rise to a level where larger ships could no longer reach the coast. At the end of the 19th century the Kalajoki Harbour was moved to its current location in Rahja.

The Santaholma business founder was Antti Pahikkala (1840-1918). At the beginning of his business career he purchased the Sandholm estate which is located near the Plassi Market Place {rokbox text=|[+].|}index.php?option=com_content&view=article&id=70&catid=4&tmpl=component{/rokbox} He settled there with his family and changed his name to Santaholma. It was a common practice, for farmers, at the time to change ones name after the place were they moved to. He sold and bought flax, grain, butter, tar and calf skins. He also had a rural general goods shop in the estate where he lived. His commercial activities extended as far as St. Petersburg. When visiting these far off trading points he traveled by horse carriage or with his own sailing boat. He was also active in the development of the local sailing and steam boat traffic and the harbour conditions.

Antti Santaholma, along with his five sons built the ‘Jokisuu’ sawmill in the year 1903. This saw mill is located at the north end of the Market Place. Their business became one of the largest in Northern Finland. The head quarter of the business was located in Antti Santaholmas old house which is near the Plassi Market Place which is used today as the Village House for Plassi people.

The Santaholma sons started to run the business after their father. Juhani was responsible for foreign correspondence, Siivert internal purchases, Antti was a technical manager, Olavi took care of granite exports and Oskari purchased timber. Over time the brothers became very skilled business men and they could also take advantage of European markets. Oskari became the Managing Director of the business in 1924. He received the titles of Commercial Councilor and Communal Councilor.

In 1880 a request came from Aberdeen, Scotland to Antti Santaholma to inquire if there was any good quality granite in Kalajoki. This request started Antti Santaholma interest in granite and so he began to mine the area and managed to find some granite from the southern side of the River Kalajoki. He started to ship the granit to Scotland and England to be used primarily as gravestones. Later on he started a stone masonry by himself and that is why there are so many great stones in the Kalajoki Cemetery as they are made using this granite. 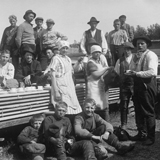 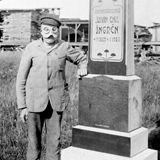